DID JESUS ALWAYS TURN THE OTHER CHEEK? 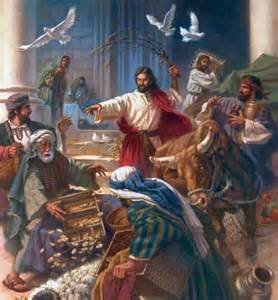 Generally speaking, in most cases, it works better to turn the other cheek rather than get into an altercation with someone, especially if it makes matters worse.  However, Jesus didn't worry about what people thought of him when he needed to take care of people who were harming anything to do with the Kingdom of God.  The temple of God was to be revered, and when the vendors of wares took over the temple as a market place, Jesus took matters into his own hands.  He took a whip and ran them out of the temple.  Today, I would like to take a whip and run the Democratic leaders out of Congress with a whip with Schiff out the door first, Pelosi, Shummer, and Nadlar following close behind.  The earth belongs to God and they are contaminating our world with their corrupting lies and breaking the ninth commandment of THE TEN COMMANDMENTS.