Why do churches split? 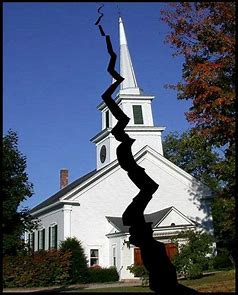 Why do churches split?   Churches are supposed to be "safe" places to inspire and encourage a Christian  in their walk of faith and should not be submitted to gossip and backstabbing or other unGodly behavior.  Too many times, churches become battle grounds for people who want to run everything, and they have the "my way or the highway" personalities.  Personally, I think some people get a "emotional high" when things are going wrong and gossip is running rampant.  The list is long.

If there was ever a place where people should be able to resolve problems  it should be in a church.   Pastors pride themselves on counseling couples whose marriages are in trouble, parents who have rebellious children, and more.  Yet, when there is a problem in their church, many pastors don't have a clue how to deal with the problems, especially when THEY are the problem.

For the sake of privacy, I will not name any names and will not go into detail regarding the problems that was creating disharmony in the church.

After the business meeting, being faced with an impenetrable wall of obstruction, a large segment of disillusioned members had no choice but to walk out as a unified group with no intention of ever returning.  By doing this, through the "gossip vine"  the group has been been labeled  "evil" people.  I post this to set the record straight.  This group of people are some of the sweetest and most sincere Christians I have ever known.

I am a person who encourages people to "think," to use their God-given brain to try and figure out "why" things are like they are and "why" people may take actions others do not  understand.

Intelligent people should consider "why" the members left, members who have been there since the initial foundation of the church, have served as the backbone of the church, have worked to serve in leadership roles, have taught Sunday School classes, have worked hard in children's programs, have given tons of money to improve the functioning of the church, and more...to consider "why" this large segment of people would leave their beloved church unless the problems were of an extremely serious nature.

GOD IS DISAPPOINTED WITH  DYSFUNCTIONAL CHURCHES, like was described in Revelation regarding seven churches, and he impressed me to write in my latest book about some of my experiences in attending churches...churches that were supposed to inspire me and not to discourage me.  One day I will revise my latest book and add this experience as an additional chapter.  Why?  To make people "think" about how they act as members and leaders of churches.

After experiencing many difficult problems in churches during my lifetime,  I have found that God sometimes allows bad things to happen to steer us down a different path and into a better situation.  This is what has happened to the group that left the church.  We meet together on Sundays for bible study and where there is a lot of laughing going on in our fellowship.  Some of us have joined a great church that feeds/satisfies our spiritual needs.