BE CAREFUL WHO YOU VOTE FOR 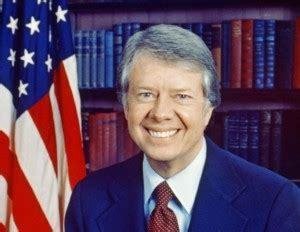 Can you imagine what the liberal media would do to Trump if he allowed the prime interest rate to climb to 21.5% today.  It happened during Jimmy Carter's time as president of USA. IT COULD HAPPEN AGAIN...OR SOMETHING EVEN WORSE.

Back in the late 1970s, I was a DEMOCRAT and voted for Jimmy Carter as president of the USA.  Why did I vote for him?  Easy!  Look at his sweet smile.  He claimed to be a Christian.  He came across as a very honest man.  Maybe he was/is a good man, but he did not know how to be a  leader of USA.

You do not need to vote for someone who has a winning smile, is very articulate, has name recognition, excellent bartending skills, or something else trivial.  A president should have a resume of accomplishing great things.

In the late seventies, my husband was a very successful homebuilder.  We were not in debt personally.  Everything we owned was paid-in-full.  At that time, we were rich, owned a beautiful home and drove big cars, all paid for, which we had worked very hard to achieve/accomplish.

After many years of building and selling homes, with the loans offered to a home buyer or a  builder/contractor,  the prime interest rate began to climb in October 13, 1978 and finally peaking out on December 1, 1980 at 21.5% and did not return to 10% until May 20, 1985.  It took 7 years for the interest rate to return to the reasonable rate of 10%.

Commonly, the banks offer homebuilder construction loans at 2% higher than the prime rate.  My husband built a number of houses that were sitting unsold due to the high interest rate.  Money stopped coming in, but money still had to go out.  The banks had to be paid at 23% on each of the houses sitting unsold.  We had to take our personal savings to completely pay off the construction loans on many of the houses, which depleted our personal (non-business) money quickly.  I am talking about 100s/thousands of dollars.

At that time, my husband and I switched from being  DEMOCRATS  to being REPUBLICANS.

The thought of electing another DEMOCRATIC president, especially amongst the candidates running today, scares me to death.  I have survived one debacle from a incompetent president, and I don't want to go through another one.  In this chaotic world, ANYTHING CAN HAPPEN so you need to give a lot of thought before you vote.

I repeat...can you imagine Trump allowing the prime Interest rate rising to 21.5% today?